University of Tulsa students competed in a new event at this year’s American Institute for Chemical Engineers (AIChE) conference. Four chemical engineering seniors represented TU in the ChemE Sports competition on Nov. 10 at the AIChE Annual Meeting in Orlando, Florida.

The competition challenges students to operate a distillation column and simulate the separation of chemicals through a software  program offered by Simulation Solutions Inc., a New Jersey-based company that provides generic process simulations for chemical refineries. Combining case studies, computer-aided design and simulation, the software primarily trains refinery employees but also is used for educational purposes by a small group of universities, including West Point, Stanford and Columbia.

When Columbia engineering faculty member Robert Bozic learned there was strong interest in developing an event that tested the knowledge and skill of chemical processing, the idea for a ChemE Sports challenge was born. Bozic worked closely with President Donald Glaser and chemical engineer Matthew Garvey of Simulation Solutions to develop the contest, inspired by Esports and designed to educate students on chemical process engineering. “We adapted the software for competition by adding a score-based component based on profitability and safety,” Garvey said.

Teams must complete a simulation within safety standards while producing a material that is profitable after factoring in the cost of cooling water and raw materials. Competitors are eliminated until one team is declared the champion. Based on the overwhelming amount of feedback Garvey said he and his colleagues received the first year, organizers hope to open the ChemE Sports competition to a larger number of teams in the future. “We’re looking at allowing teams to compete remotely at their university or attend a regional event to narrow down the field for the in-person simulation at nationals,” he said.

In preparation for the competition, the TU team met in a chemical engineering lab once a week to gather around a cluster of computer monitors that displayed fluid levels, temperature gauges and other readings. The students spent hours operating the distillation column, troubleshooting problems and familiarizing themselves with the gauges, instruments and equipment. “This is a 3-D simulation where you get to walk around and see how all of the equipment would be laid out, how the pump can turn on or off and what the readings would show,” said team member Olivia McLaughlin of St. Louis, Missouri.

Practicing the simulation involved adjusting valves manually through computer commands to separate the chemicals without triggering any safety alarms. “We tried to compile a lot of information to have on hand for the competition so that we could make changes quickly,” said teammate Nick Biasetti from Saratoga Springs, New York. 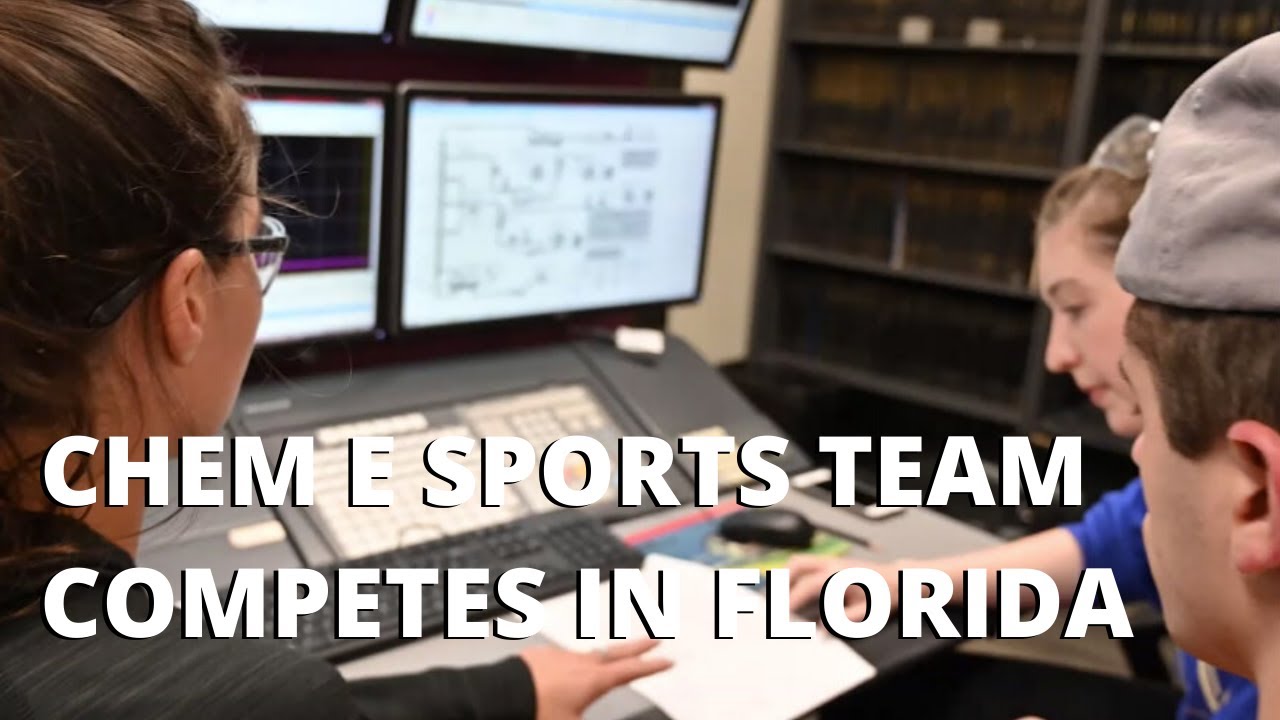 Chemical processing in the real world

Biasetti describes the event as an environment where students are virtual operators in a processing plant. The simulation focuses on plant components where separating two chemicals could produce benzene or other industrial applications. Processing these types of chemicals is a lucrative industry with high consumer demand. “We tried to simulate conditions we might see during the event,” he said. “We did a cold start with everything closed and nothing in operation and chose different conditions for a good baseline before we started tweaking things.”

During a simulation, students had to think on their feet and resolve problems, such as machines switching off or breaking.

“The most difficult times in a plant are startup and shut down,” McLaughlin explained. “A cold start simulates a startup procedure when the pressure is fluctuating wildly compared to starting the process from base conditions when everything is running fine. You don’t want pumps to turn off or valves to fail. It’s so complex.”

Other team members were Donny Gross of Lake Zurich, Illinois, and Annabeth Fouts of Edmond, Oklahoma. The group’s faculty adviser was Chapman Associate Professor of Chemical Engineering Laura Ford. “The months of preparation and experience in competition helped the students gain a deeper understanding of the interconnections between the parts of a distillation column,” she said. “The dynamic simulation allowed them to see how one change they make propagates through the entire system over time.”

From simulation to graduation

The TU students competed against 15 other teams and had the opportunity to network with other chemical engineering students as well as industry professionals at the AIChE meeting. Internship experience at Tulsa engineering firms, including Zeeco and GasTech Engineering, along with the AIChE challenge has influenced the team’s career goals; Biasetti remarked he’s interested in process engineering after he graduates in May 2020.

“I like troubleshooting and making sure all of the products are to spec,” he said. “I’d like to have the responsibility of making sure everything is safe and running according to plan. It’s cool to do this simulation outside of the classroom setting because it’s something I could be doing for a living someday.”

Two students from The University of Tulsa College of Engineering and Natural Sciences received top honors at the 2019 Research Day at the Capitol in Oklahoma City.

They presented competitive research posters to the State Legislature and the public during the annual event, sponsored by Oklahoma NSF EPSCoR, the Oklahoma State Regents for Higher Education and the National Science Foundation. The event is designed to raise awareness of the outstanding research that is taking place at Oklahoma’s colleges and universities.

Amorim and Badrinarayanan created Research Connect to help students and faculty connect with national research laboratories and share their research on a broader scale.

Badrinarayanan said his research is in a multi-disciplinary project where the goal is to design a novel, hybrid bioreactor that uses spectral conversion techniques to increase the algal biomass productivity. He is also working on a project where the aim is to use produced water – a major waste stream in the oil and gas industry to grow microalgae, which helps in bio-remediation as well as provides a source of biomass rich in lipids.

“Personally, the exciting aspect about my research is that I get to collaborate and work with other people,” Badrinarayanan said.

Badrinarayanan said that attending conferences and discussing findings with experts in the field is a great, exciting opportunity to enhance the learning experience—a long-term goal of the Research Connect event.

Badrinarayan chose to attend TU for graduate school because the university is well-known for its engineering programs. The small, beautiful campus and diverse student population from countries around the world surprised him.

“I was also amazed about the history of the school and how the engineering program’s inception dates back to the days when Tulsa was known as the ‘Oil Capital of the World,’” he said.

Badrinarayan said that after completing his graduate studies, he plans to work in industry or academia as a research fellow.

“I will miss the plethora of events that we get to attend on campus every year. Specifically, the Homecoming bonfire tradition will be a memorable one,” Badrinarayan said. “I will also miss my friends from several countries. Many whom I wouldn’t have met if not for TU.”